The DOCTOR STRANGE Little Golden Book came out in January 2017. While I was writing this book, I pored over old Doctor Strange comics, and I steeped myself in Doctor Strange lore. Hopefully that will be evident to anyone who reads the book. Also, this book was illustrated by Michael Atiyeh and Michael Borkowski, both of whom totally crushed it. Seriously, the illustrations in this book are gorgeous. The JURASSIC PARK Little Golden Book comes out in February 2018. It’s a retelling of the first JURASSIC PARK movie, the one that came out in 1993. In fact, this book is being released just in time for the 25th anniversary of that film. While I was writing this book, I watched JURASSIC PARK so many times that I pretty much have a PhD in “Jurassic Park Watching.” Writing this book is also the closest I’ve come to working with Jeff Goldblum. So, there’s that. This book was illustrated by Josh Holtsclaw, who’s incedibly talented.

THE THREAT OF THANOS 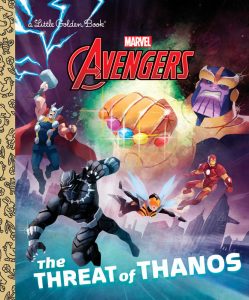 This is an AVENGERS Little Golden Book, in which the Avengers fight Thanos. It comes out in July 2018. The specific Avengers who appear in this story are Iron Man, Thor, Black Panther, and the Wasp. Even though it comes out a few months after the AVENGERS: INFINITY WAR movie, THE THREAT OF THANOS is NOT a retelling of INFINITY WAR. It’s a completely new, original story. This book was illustrated by the wonderful Shane Clester, who did an amazing job.