After FROM KRAKOW TO KRYPTON was published, I wrote quite a few other nonfiction books. They tend to fall into two categories: (adult) nonfiction and juvenile nonfiction. But I think it’s okay to lump them all together here, for simplicity’s sake. 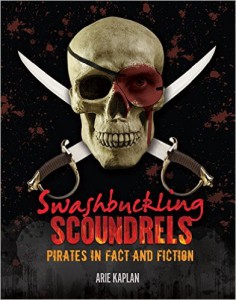 This is a juvenile nonfiction book I wrote on the history of piracy, from ancient Rome to the present. Since the dawn of human civilization, pirates have prowled the seven seas, looting cargo-laden vessels and plundering everything from gold and silver to exotic foodstuffs. Modern-day pirates wield automatic weapons and siphon petroleum from tanker ships. Pirates occupy a world of violence, desperation, and bloodshed. However, they’ve acquired a reputation as noble anti-heroes and lovable adventurers. Why is that? SWASHBUCKLING SCOUNDRELS answers that question, while introducing readers to medieval Viking raiders, Caribbean buccaneers, black pirates, female pirates, and modern-day Somali pirates. But the book also examines famous fictional pirates like Long John Silver and Mary “Jacky” Faber of the Bloody Jack series of novels. How do fictional pirates stack up against their real-life counterparts, and why do audiences have an undying thirst for stories of daring outlaw pirates?

ALSO: After I wrote this book, I added a “Swashbuckling Scoundrels” talk to my repertoire of lecture topics. Just something to think about if you’d like to book me for a lecture.

DRACULA: THE LIFE OF VLAD THE IMPALER 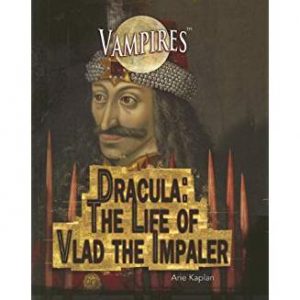 Check it out! A children’s book about Vlad the Impaler. Wait, that should actually be, “The ONLY children’s book about Vlad the Impaler IN EXISTENCE.” This book was published by Rosen Publishing in 2011. Vlad the Impaler, aka Vlad Dracula, was a real-life Romanian warrior-prince who REALLY liked to torture people. When Bram Stoker wrote the novel Dracula, he was inspired by Vlad. But what elements of Vlad’s life did he incorporate into his novel, aside from the name “Dracula”? You’ll have to read the book to find out.

Some time ago, I wrote a series of six juvenile nonfiction books covering every aspect of the videogame industry. It was published by Lerner Publishing Group in 2013. I think it came out rather well. While writing these books, I discovered that I had a facility for breaking down difficult scientific and technological concepts and explaining them in a kid-friendly way. The six books in the GAMES & GAMERS series are: But I know what you’re thinking: what do the critics say about the GAMES & GAMERS series? Good question, and here are two answers:

“Young gamers who wonder what’s inside their Xboxes or how those dramatic graphics are created will come away from these satisfying volumes with plenty of facts.” —SCHOOL LIBRABRY JOURNAL, Series Made Simple

“This high-interest series will capture the attention of the video game generation….This is an entertaining and informative set with design and content best suited for young teens.” —VOYA