Archive for the ‘From Krakow to Krypton’ Category

On Tues April 12th, 2022 at 7pm EST, I’ll be giving a FREE virtual lecture on the history of Jews and comic books at The Workers Circle. To register for the event, click HERE.

The lecture is called “From Krakow to Krypton,” and it’s based on my critically acclaimed nonfiction book of the same name.

In the late 2000s, I wrote two Hanukkah-themed comic book stories. I was just thinking about them recently because it IS that time of year, and also it’s been a while since I wrote a Hanukkah-themed story. Maybe I’ll write another one someday.

But until then, I’m pretty proud of how these two tales turned out.

Want me to tell you about them? Of course you do.

The Ballad of Flipper the Hanukkah Turtle

The first one is called “Not a (Green, Slimy) Creature Was Stirring,” and it first saw print in The Simpsons Winter Wingding #3, published by Bongo Comics in November 2008. “Not a (Green, Slimy)…” was penciled by Phil Ortiz, and inked by Mike DeCarlo. After its initial publication in 2008, this story was reprinted by Bongo several times in various trade paperback collections (e.g. The Simpsons: Homer for the Holidays, published in 2010). So I guess that means that the folks at Bongo liked it. Which is good to know.

Krusty the Clown realizes that there are many Christmas mascots (e.g. Rudolph the Red-nosed Reindeer, Frosty the Snowman, etc). But there are no Hanukkah mascots. So since Krusty is Jewish, he decides to CREATE a Hanukkah mascot. He doesn’t do it so that all the Jewish kids out there will have a mascot that represents them; he does it just so that he can reap all of the merchandising money that such an easily marketable mascot character would generate. 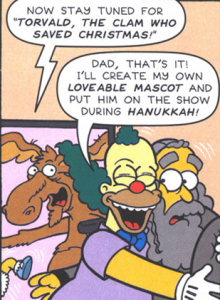 So Krusty creates a mascot – or rather, he hires a team of Springfield schoolchildren to create the mascot, because he can’t be bothered to do it himself. The children (Bart, Lisa, Nelson, Milhouse, and Ralph) come up with a mascot character called “Flipper the Hanukkah Turtle,” and they present Krusty with a crayon sketch of Flipper. But Krusty’s art department bases their Flipper costume on the children’s crude, unintentionally ugly drawing, and it comes out looking HIDEOUS. On the first night of Hanukkah, when Sideshow Mel goes on Krusty’s TV show wearing the Flipper costume, it traumatizes all the kids in Springfield.

At that very moment, the aliens Kang and Kodos are orbiting the Earth in their spaceship and they watch Flipper on their viewscreen. They think that Flipper is “Xarthon 9,” the deity of their winter solstice festival. Kang and Kodos invade Krusty’s TV studio and immediately begin worshipping “Xarthon 9” (which is still Sideshow Mel in a Flipper costume), telling the “deity” they’ll do whatever he tells them to do. This gives Krusty an idea, and on the SECOND night of Hanukkah, he has TWO Hanukkah mascots on his show: Moishe and Mendel (Kang and Kodos with yarmulkes and beards), and they’re not HALF as revolting as Flipper was! They don’t know why Xarthon 9 wanted them to juggle dreidels on live television, but they know not to question the will of a deity!

I wrote “Not a (Green, Slimy) Creature Was Stirring” because I honestly do think it’s kind of weird that there’s no Jewish equivalent of Rudolph or Frosty. So I created one! Until there’s an actual Hanukkah mascot in the real world, I guess Flipper the Hanukkah Turtle will have to do. 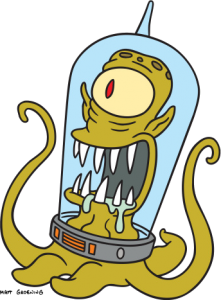 Also, I included the following detail in the art notes (aka stage directions) for the final panel on the final page of the script:

“Kang is JUGGLING TOY DREIDELS with his tentacles, while Kodos is lighting one of the CANDLES on a LITTLE GOLD MENORAH shaped like HIMSELF (with his TENTACLES as the candle holders).”

And Phil Ortiz and Mike DeCarlo DREW that Kodos-shaped menorah into the final panel of the story. That menorah looks SO cool, and to this day, I’m amazed that – with all the Simpsons merchandise out there – no toy company has made an officially licensed Kodos-shaped menorah. Maybe someday…

The second Hanukkah-themed comic book story I wrote was a Superman tale titled “Man of Snow.” It was penciled by Nick Runge and inked by Gabe Eltaeb. And it was published in November 2009, in the pages of The DC Universe Holiday Special ’09 (DC Comics).

In “Man of Snow,” Superman is headed over to Smallville, to spend time with Ma Kent. He’s bringing her giant drums of caramel corn for her to snack on. On his way there, he’s flying over the Metropolis suburb of Park Ridge when he’s attacked by a golem. And not just any golem, a golem made of snow! The golem hits the Man of Steel so hard, the drums of caramel corn go flying over the horizon. Superman is flummoxed. What’s going on? 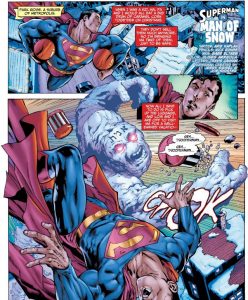 Superman soon discovers that the creature was accidentally set upon him by a 12-year-old Jewish boy named Yosef, who has a very unique superpower: he can imbue inanimate objects with life. The boy is a gifted sculptor, so he creates sculptures of fantasy creatures (dragons, gargoyles, ogres, etc) and brings them to life for his own amusement. Yosef has cystic fibrosis and lives with his grandfather. Superman wants to know why the golem attacked him. Yosef explains what’s going on as we see it in flashback:

Earlier that day, Yosef was feeling lonely, so he made the snow golem as a playmate. While playing with the golem, Yosef wandered aloud that it would be great if the golem could “get Superman” for him (as an additional playmate). The golem took this literally and trudged off to get Superman. Which is why Superman was attacked by the golem in the first place. (Thus ends the flashback sequence.)

Superman feels for Yosef, and he realizes that the boy didn’t mean any harm. The Man of Steel flies Yosef all over Metropolis, as they look for stores that are still open so that they can get two replacement drums of caramel corn for Superman to bring to Ma Kent.

And that’s “Man of Snow” in a nutshell. It’s a very short story, clocking in at a mere 4 pages. It’s only a Hanukkah story because at one point Yosef tells Superman that it’s the first night of Hanukkah. And we see a menorah in the house Yosef shares with his grandfather. But unlike “Not a (Green, Slimy) Creature Was Stirring,” which is all about Hanukkah, the Festival of Lights doesn’t really factor into the plot of “Man of Snow” in a major way. 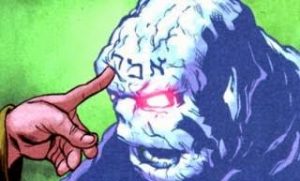 But it’s a very personal story to me for a couple of different reasons. For one thing, Yosef is based on me – well, me at 12 years old. I didn’t have cystic fibrosis growing up. But, much like Yosef, I was a reclusive, nerdy, artistically-inclined kid who was always making drawings and sculptures of fantasy creatures. I didn’t eat drums of caramel corn with my parents when I was a kid. But I did eat homemade popcorn with my parents during the winter holidays, when they’d show my favorite movie on TV. That movie? 1978’s Superman, starring Christopher Reeve. And by the way, my middle name is “Yosef.”

Also, about a year before I wrote “Man of Snow,” my book From Krakow to Krypton: Jews and Comic Books had come out. And there’s a chapter in that book where I explore the question of whether Superman’s a golem figure. In other words, whether Superman’s creators, Jerry Siegel and Joe Shuster, were inspired by the legendary golem of Prague when they first dreamt up Superman. After all, like the golem, Superman is a larger-than-life, super-strong being who helps the helpless. Is Superman a modern-day 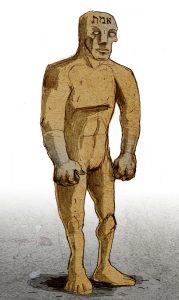 golem? Many pop culture historians have debated this point over the past few decades. For the record, I personally don’t think that Superman is a golem figure. However, I did think it’d be a cool idea to have Superman fight an actual golem in a comic book story. So I wrote “Man of Snow.”

Golems are usually made of clay – at least, they are according to legend. The golem of Prague was made of clay. These days, there are many video games that use golems as characters, and I’ve seen games featuring golems made of metal, wood, stone, and various other materials. So when I was writing “Man of Snow,” I figured a golem made of snow would be a unique variation on the golem legend. And after all, as Yosef says in the story, making a golem out of snow is “more festive for this time of year.”

You know, he’s not wrong.