Archive for the ‘horror movies’ Category

Hey, I Came Up With Some Title Ideas for a Hanukkah-Themed Horror Movie 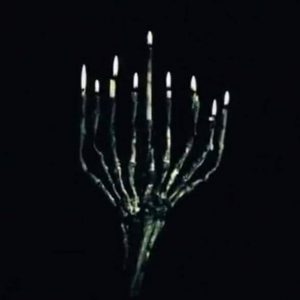 You know what? It’s Hanukkah! So I figured I’d talk about Hanukkah! No, not Hanukkah the holiday; Hanukkah the MOVIE. See, there’s a horror film that came out a few years ago called Hanukkah. It’s a slasher movie about Hanukkah, and they decided to CALL the movie Hanukkah. Which is a terrible title for a Hanukkah-themed horror movie. It’s so unimaginative! I mean, couldn’t they come up with a better title than…Hanukkah? It doesn’t even SOUND like a horror movie title.

I know that some of you reading this might be thinking, “Oh yeah, Arie? You think you can do any better? You think YOU can come up with a better title?”

And here’s my answer: Challenge accepted! I decided to come up with a list of BETTER titles for a Hanukkah-themed horror movie. I gave myself a few minutes to accomplish the task, and here are the titles I came up with:

There. ANY of those are a better title than Hanukkah. So if you’re reading this and you’re a film producer, and you want me to write a Hanukkah-themed horror screenplay to go with any of the above titles, you know where to find me. (Um, via the “Contact” page of this website. Or just email me at arie@ariekaplan.com That’s where you can find me.)

Monsters (And Not The “Elmo” Kind)

I was recently interviewed by reporter AJ Frost for the geek culture site The Beat. We talked about my recent children’s book projects for Scholastic and Disney Book Group. We also talked about the series of lectures that I’ll be doing throughout 2017 at the NYC performance space QED Astoria.

I’ll be kicking off that lecture series with a talk titled “THE MONSTER MAKERS: UNIVERSAL PICTURES, CARL LAEMMLE JR., AND THE GOLDEN AGE OF HOLLYWOOD HORROR MOVIES.” It’s happening on Saturday January 7th 2017 at 2pm.

This first wave of monster movies (1931’s Frankenstein, 1933’s Invisible Man, 1941’s The Wolfman, etc) didn’t just inspire future generations of horror filmmakers. It inspired ALL purveyors of fantastic cinema, including Steven Spielberg, J.J. Abrams, Peter Jackson, Joss Whedon, Clive Barker, and Robert Rodriguez. Not to be coy, but I can’t really tell you WHY or HOW it influenced them. Because then you wouldn’t come and see the lecture.

During my “MONSTER MAKERS” lecture, I’ll talk about people like Boris Karloff, Gloria Stuart, Bela Lugosi, Tod Browning, James Whale, Curt Siodmak, and Jack Pierce. By the time I’ve finished the lecture, you’ll understand why those people are important, why you should care about them, and how they shaped modern pop culture.

You’ll also understand what all of this has to do with the creation of the first wave of comic book superheroes, and how these horror movies were informed by then-recent events in world history.

And I just might explain how the story of these early horror filmmakers ties in to the narrative of my award-winning nonfiction book From Krakow To Krypton: Jews And Comic Books.