Archive for the ‘humor’ Category

Recently, I co-wrote a book called The LEGO DC Super Heroes Visual Dictionary, which will be published by DK tomorrow, Tuesday September 4th, 2018. (My co-author on that project was Elizabeth Dowsett.) In April, I talked about what it was like working on the book when I was interviewed by the geek culture blog Comics Beat. As of this writing, The LEGO DC Super Heroes Visual Dictionary is the #1 New Release in Children’s Dictionaries on Amazon. And here’s some info on the book from the Penguin Random House site: 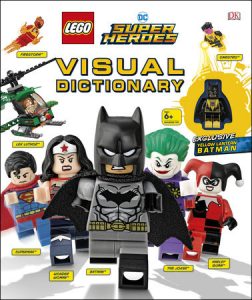 Happy Holidays! Happy Almost-New-Year’s-Eve! Okay, so there are a few new things that I want to announce:

Recently, I wrote two LEGO STAR WARS books for Scholastic. The first one, LEGO STAR WARS: FACE OFF (illustrated by Dave White), is out now. You can see some excerpts from the book HERE.

The second LEGO STAR WARS book that I wrote is called THE OFFICIAL STORMTROOPER TRAINING MANUAL, and it comes out next month. And guess what, you lucky people? You can see some excerpts from THAT book HERE.

I talked a little bit about what it was like writing those LEGO STAR WARS books when I was a guest on the COMICSVERSE podcast, and you can listen to that podcast interview here.

And I wrote two of the stories in the 5-MINUTE SPIDER-MAN STORIES anthology, which will be published by Marvel Press in June 2017. (I don’t have a cool link for that, but I should soon.) Interestingly enough, one of the stories that I wrote in each of those anthologies is a time travel story (and yes, there’s a reason for that).

And starting in January 2017, I’ll be doing a series of pop culture-oriented lectures at NYC performance space QED Astoria. The first one is a talk on the Golden Age of Universal horror movies (e.g. James Whale’s 1931 FRANKENSTEIN). It’s called “THE MONSTER MAKERS: UNIVERSAL PICTURES, CARL LAEMMLE JR., AND THE GOLDEN AGE OF HOLLYWOOD HORROR MOVIES,” and I’ll be giving that talk on January 7, 2017 at 2pm.

I’ve also got quite a few other speaking engagements slotted for various dates in 2017, and I’ll be posting the specifics on THOSE lectures here soon too.