Here’s a “greatest hits” list of the many stories I’ve written over the years. 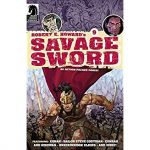 In “Paper Tiger,” merchant sailor (and amateur prizefighter) Steve Costigan is trailed by a nerdy pulp magazine writer who wants to study Steve’s exploits as research for a new story he’s writing. But this pulp writer is more than he seems…

“The Story of the Ocean” – published in Mankind: The Story of All of Us, Volume 2 (Zenescope Entertainment, 2012) 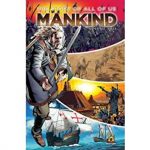 This story is a work of YA historical fiction which traces the history of boat-building and sailing, from ancient Egypt until the 1800s. Along the way, a series of vignettes show the reader the many ways in which sailing helped various societies explore, and trade with, other cultures. This helped numerous cultures to advance technologically, and it also helped them to better understand the world around them. This story was part of an anthology, and every tale in that anthology examined something found in everyday society (e.g. wheat, or gunpowder) and how that “something” propelled human civilization forward. My “something” was the ocean, and my story explored how humanity sought to tame and navigate the ocean over the centuries. The “Mankind: The Story of All of Us” anthology graphic novels were based on the History Channel documentary series of the same name, and they were officially licensed by the History Channel. But each of these comic book stories were original, and they weren’t adaptations of the stories in the documentary series.

“The Story of the Ocean” was illustrated by Michael Watkins & Bob Petrecca. 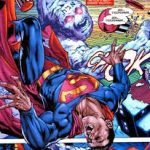 In “Man of Snow,” Superman finds himself suddenly attacked by a golem made of snow (a Snolem?), whose master is a sickly pre-teen with the power to bring inanimate objects to life. Who is this kid, and why did he send his golem to attack the Man of Steel?

“Man of Snow” was illustrated by Nick Runge (pencils) and Gabe Eltaeb (inks). 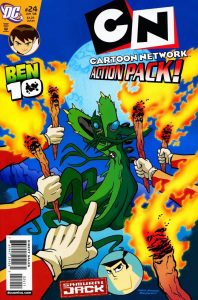 In “Special Defects,” Ben Tennyson (aka Ben 10) fights a deranged Hollywood special effects whiz who’s attacking a Hollywood soundstage. During the story, Ben is pitted against an animatronic Dracula robot, and he has to turn into Benwolf to win the fight xagainst this mechanical menace! Therefore, it’s the only Ben 10 story to date to feature a full-on battle between Dracula and the Wolfman.(Well, sort of!) 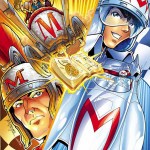 In the “Chronicles of the Racer” miniseries, Speed Racer discovers that he’s the last in a long line of “Racers,” champions who were chosen by fate to out-race the evils of this world. The story alternates between the present-day adventures of Speed chasing after his cryptic foe, and the past Racers battling an eerily similar villain. Specifically, we see the Racers of Ancient Rome, Medieval England, the Golden Age of Piracy, and the Old West. Like TIME BANDITS or STAR WARS, SPEED RACER: CHRONICLES OF THE RACER is the ultimate children’s adventure story, chock full of chariot races, knights in shining armor, princesses, dragons, pirates, monsters, giant robots, and cowboys. And lots and lots of racing.
“Speed Racer: Chronicles of the Racer” was illustrated by Robby Musso and German Torres. 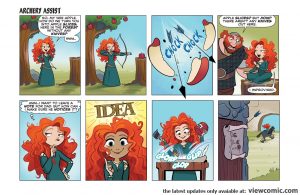 In “Archery Assist,” Merida (from the Disney Pixar film BRAVE) is always being called upon to use her archery skills to assist those around her. And she’s happy to help, but eventually the constant running around DOES start to exhaust her… 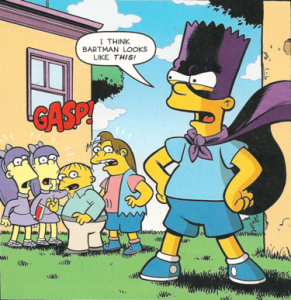 In this parody of the classic Batman story “The Batman Nobody Knows,” the children of Springfield Elementary (specifically, Nelson, Sherri & Terri, and Ralph) each think they know who Bartman REALLY is underneath that purple mask. As each child tries to convince his/her friends that they’ve solved the riddle of Bartman’s secret identity, Bart Simpson (who actually IS Bartman) watches them, amused.

“Who the Bartman” was illustrated by Tone Rodriguez (pencils) and Andrew Pepoy (inks). 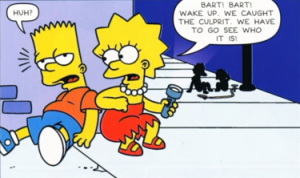 One day, everyone in Springfield wakes up to find mustaches painted on every painting, billboard, photograph, and print ad in the city! Everywhere there’s a picture of someone, that “someone” now has a mustache. It seems like something Bart Simpson would do, and everyone assumes he did it, but he swears he’s innocent! His sister Lisa believes him, and she vows to use her detective skills to find the REAL culprit.

“The Day of the Mustache” was illustrated by Nina Matsumoto (pencils) and Mike Rote (inks). 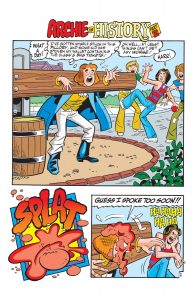 In the 2-part story arc “Archie is History,” Archie and his friends head for Washington, D.C. to take part in a living history festival where everyone dons costumes of their favorite historical figures! Does Archie have what it takes to portray a Revolutionary War hero? Will Betty and Veronica fight over who will wear the Medieval Princess gown? Can Jughead rustle up some grub as a Wild West cowboy? What kind of scoundrel will Reggie dress as? 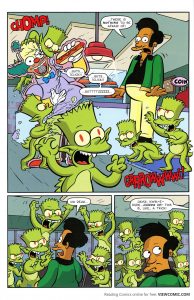 In “Graveyard Shift,” Apu accidentally receives a shipment of adorable gremlins intended for the sorcery shop a few doors down the block. Unfortunately, he doesn’t read the warning that tells him not to feed them Squishees after midnight. (Yup, this one’s a parody of the 1984 movie Gremlins! But it’s also my tribute to the 1960s horror anthology television series Thriller.) 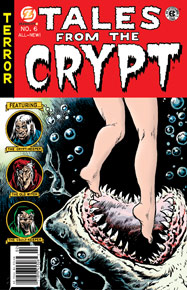 In “Jumping the Shark,” a reality TV producer, fond of dreaming up horrible ways to torture the show’s contestants, doesn’t stop pitching shows, even after he dies! A zom-com (zombie comedy) showbiz satire!

“Jumping the Shark” was illustrated by Mr. Exes. 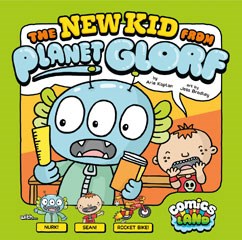 In this graphic novel, Nurk, a child from the planet Glorf, journeys to our world, where he meets Sean, a boy who teaches him about what school is like on planet Earth.

“The New Kid from Planet Glorf” was illustrated by Jess Bradley. 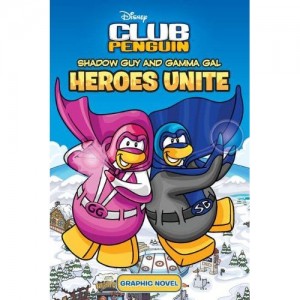 This graphic novel tells the origin story of Shadow Guy and Gamma Gal: who they are in their civilian identities, how they met, how they got their superpowers, how they first teamed up, etc. The story is set in the world of the Disney Club Penguin MMO, and it features such beloved CP characters as Gary the Gadget Guy, the Sensei, and Aunt Arctic. Many scenes even take place in well-known Club Penguin locales like the Pizza Parlor and the Dojo. And for those of you who are hardcore Club Penguin fans, yes, I know that Shadow Guy and Gamma Gal aren’t real characters in the Club Penguin MMO – they’re just “roles” you can play in the in-game stage play SQUIDZOID VS. SHADOW GUY AND GAMMA GAL. That’s why the narrator of the graphic novel, Joe the penguin cartoonist, says that he “made up” the story. Technically, it takes place outside of the official Club Penguin canon.”Shadow Guy and Gamma Gal: Heroes Unite” was illustrated by Richard Pimentel Carbajal.