Did you know that 2019 is Batman’s 80th birthday? It’s true! What would happen if the Caped Crusader actually WAS – er, I mean an elderly person? Here’s a Nerdist article about my upcoming MAD Magazine story, “What If Batman Were Actually 80 Years Old?” 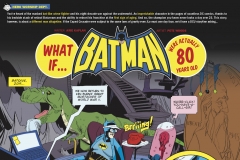 It’ll be published in the pages of MAD #9, which comes out on August 6th. Artist Pete Woods illustrated the story, and he did an incredible job.  Check out the Nerdist piece (and my “What If Batman…” story in its entirety) via the link above. And click on the thumbnail on the right to see a sneak peek of the first page!

Here are a few more announcements, but if you’ve been to my blog before, you’ll know that afterwards I’ll reward your patience with a humiliating anecdote from my writing career. (So keep reading!)

Two weeks ago, at San Diego Comic Con, I signed copies of Star Wars Adventures #23.  Here’s a picture of me at the signing, which took place at the IDW booth! (I wrote “Majordomo, Major Problems,” the Tales from Wild Space backup story in that issue. The story was illustrated by the amazing Drew Moss.) I’m not the only person who’s excited about Star Wars Adventures #23. The issue got a wonderful review from SciFi Pulse.

Journalist Jonita Davis interviewed me for The Black CAPE, an online publication that caters to older millennial and Gen X film and TV nerds. In the interview, I talked about “Majordomo,” as well as some of the Little Golden Books I’ve written for Penguin Random House (e.g. The Doctor Strange Little Golden Book).

In other news, I wrote the recent Scholastic children’s book Hungry Shark: The Official Shark-Tastic Guide, which is a guide to all of the characters in the Hungry Shark video game franchise. The book was the subject of a blog post on the Scholastic blog, as well as a post on the Ubisoft blog. (The Hungry Shark games are developed and published by Future Games of London and Ubisoft.)

And now that you’ve made it through the gauntlet of my announcements, I shall reward you with a humiliating anecdote. However, this anecdote will not involve my writing career. No, this anecdote is from before I even had a career. This anecdote comes from my childhood! (Ooo, spooky, right?) And it has to do with Batman, so it’s relevant to the “Batman at 80” theme of this post! Anyway, here goes…

1989 was Batman’s 50th anniversary. That’s why the first Tim Burton Batman movie was released in June of that year. But at the beginning of 1989, a TON of Bat-merchandise was unleashed upon the general public, in anticipation of the film.

Allow me to elaborate: One day (in 1989), I showed up to school wearing ALL of the following:

* See, just in case I had to remove the sweatshirt, I still wanted to show that I was an enormous Batman geek. Hence, the T-shirt.

** Okay, you can’t really WEAR a doll. But I gripped the doll tightly in one hand, signifying that it was part of the ensemble. 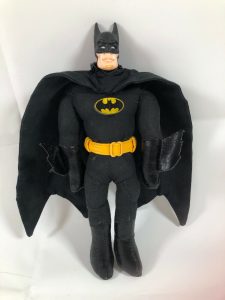 Yes, I showed up to school wearing all of that…stuff. And since the Batman sweatshirt was black, and so was the baseball cap, and so were the shoes and socks, I also wore black pants. They weren’t black BATMAN pants, but I’m pretty sure I was just hoping that I could somehow WILL them into being Officially Licensed Batman Pants.

How did I show up to school like that and not get endlessly bullied?

I mean, I DID get bullied, sort of, in that people walked up to me, their eyes bulged, and they exclaimed “Wow.” Then they got their friends, showed THEM what I was wearing, and their friends ALSO said, “Wow.” So I became the freak of the day, a sideshow-style curiosity that my fellow students could use to brighten up their otherwise dreary lives. Yay for them!

That’s what I get for dressing up like the world’s shortest Batman movie poster. And as I’m typing this, I’m realizing that this probably also explains my present-day reluctance to wear any item of clothing that has a fictional character – or a logo advertising a fictional character – emblazoned on it. It’s a rule I have. I don’t wear clothes that turn me into a walking billboard.

But I’m trying to break that rule, especially when sticking to said rule hurts other people’s feelings. For example, as I sit here typing this blog post, I’m wearing a Star Wars T-shirt which has a picture of Han Solo and Chewbacca on it. Laid over that image is a page from the Star 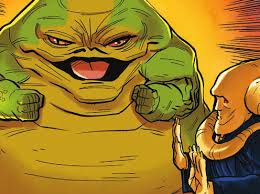 Wars screenplay. My wife bought that for me. Since I’m a writer, and I’ve worked on a few Star Wars-related projects, she thought I’d like it.

And I do. If I didn’t wear it, she would be upset by that. But what about my rule?

I guess I can break it, just this once…