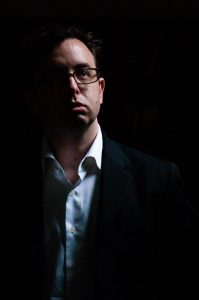 Like many authors, I’m also a public speaker. Over the years, I’ve given lectures (on various pop culture-related topics) at venues all over North America, including:

I’ve also been a guest speaker and visiting lecturer at such international events as:

Here I am speaking at the University of Arkansas in April 2017.

In that video, I was giving one of my most popular talks, “From Krakow to Krypton: A History of Jews and Comic Books” (based on my award-winning nonfiction book of the same title).

In October 2015, I spoke at Wichita State University in Kansas. My lecture was called “Superheroes, Stand-up, and Sci-Fi: An Animated Life,” and in it, I talked about my career as a writer. Just before the lecture, I was interviewed by author and WSU professor Darren DeFrain at the campus’s Media Resource Center for the university’s television station (WSUTV). These events were both great fun! (And to be honest, it was very flattering to be asked to talk about my work and career.) Both the “Animated Life” lecture and the WSUTV interview were edited together into the following video.

Aside from those two lecture topics (“From Krakow to Krypton” and “Superheroes, Stand-up, and Sci-Fi”), I give talks on many other  subjects, including the history of Jewish humor, the history of comedy (in both TV and film), the history of video games, the 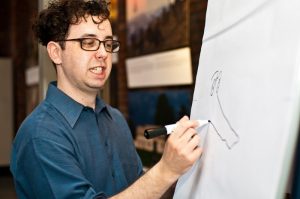 history of piracy (in real life and in pop culture), and the history of science fiction.

I also teach workshops (for both children and adults). My workshops offer students a unique window into the world of comics, cartoons, and related media. The workshops are fun and interactive, and in them, I teach everything from how to create your own superhero to how to draw one-panel gag cartoons. 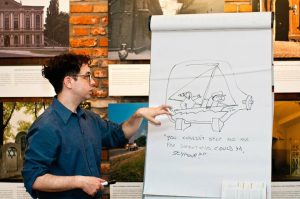 For a full list of lecture and workshop topics, please email me at arie@ariekaplan.com