From Krakow to Krypton 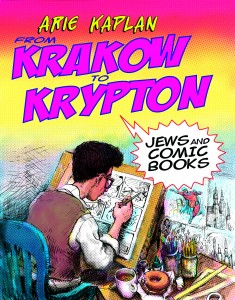 “A new and fascinating look at the history of comic books … extremely well documented and profusely illustrated. You really don’t have to be Jewish to thoroughly enjoy this trip down comic book memory lane.” –Al Jaffee, long-time MAD Magazine contributor and author of the forthcoming Talltales.

Jews created the first comic book, the first graphic novel, the first comic book convention, the first comic book specialty store, and they helped create the underground comics (or “Comix”) movement of the late ’60s and early ’70s. Many of the creators of the most famous comic books, such as Superman, Spiderman, X-Men, and Batman, as well as the founders of MAD Magazine, were Jewish. From Krakow to Krypton: Jews and Comic Books tells their stories and demonstrates how they brought a uniquely Jewish perspective to their work and to the comics industry as a whole. The foreward is by Harvey Pekar, illustrated by JT Waldman.

Over-sized and in full color, From Krakow to Krypton is filled with sidebars, cartoon bubbles, comic book graphics, original design sketches, and photographs. It is a visually stunning and exhilarating history.

From Krakow to Krypton has been named by the American Library Association as a 2009 Sophie Brody Award Honor Book. The Sophie Brody Award is presented “to the author of the most distinguished contribution to Jewish literature (fiction or non-fiction) for adults published in the United States in the preceding year.”

“For readers who are starting to explore the interface between Jewish culture and comics, Kaplan’s book may be the best place to start.”

“Krakow to Krypton is essential for any comic book nerd, but is also a good read for anyone who is interested in the Jewish role in the creation of American popular culture.”

Michael Chabon’s Amazing Adventures of Kavalier & Clay (2000) depicts an early comic-book industry dominated by Jews. Kaplan shows that the novel hews closely to the truth. Jewish businessmen were instrumental in shaping the industry. M. C. Gaines essentially created the comic book by reprinting newspaper strips in magazine format, and his son, Bill, later founded E.C. Comics and launched MAD. But it was on the creative side that Jews really shone, turning to the somewhat disreputable medium when they were barred from newspaper strips and advertising. Superman was created by two Jewish kids from Cleveland, and Batman by young Bob Kane (né Kahn). In the 1960s, the superhero genre was revived by Marvel Comics’ Stan Lee (né Lieber) and Jack Kirby (né Kurtzberg). Later, Art Spiegelman’s Pulitzer Prize–winning Maus (1986, 1991), along with industry pioneer Will Eisner’s graphic novels of American Jewish life, brought mainstream approbation to comics. Jewish influence continues—Kaplan reveals Jewish themes in Neil Gaiman’s acclaimed Sandman series—and indeed, the history of Jews in comics is essentially the history of comic books.

In From Krakow to Krypton: Jews And Comic Books, comedian and comic book writer Arie Kaplan provides an informed and informative history that is packed with history and nostalgia from beginning to end. Profusely illustrated throughout, From Krakow To Krypton is highly recommended for personal, academic, and community library “20th Century American Popular Culture” reference collections in general, and the personal reading lists of all comic book fans and graphic novel enthusiasts in particular.

Starting with a foreword in comic book format by Harvey Pekar and J.T. Waldman, you are introduced to the Jews and comics equivalent of Jules Feiffer’s Great Comic Book Heroes. From Krakow to Krypton: Jews and Comic Books by MAD magazine writer, Arie Kaplan.

I first came across the basis for this book in a series of articles in Reform Judaism magazine and right away I thought this had to be a book. From the early days of Famous Funnies and Max Gaines, the start of what would become DC Comics, and up to today’s independent publishers, the importance of Jews to the creation and success of the comic book industry is discussed. This book covers creators (Eisner, Kane, Kirby, Chaykin, Spiegelman), creations (Superman, The Spirit, Ragman), and the importance of being Jewish and using Jewish themes in the development of the comics history (Maus, The Escapist). To paraphrase the old Levy’s Rye Bread commercial, ‘You Don’t Have To Be Jewish’ to enjoy From Krakow to Krypton: Jews and Comic Books!

Once upon a time, I read comic books for enjoyment. I used to buy Howard the Duck, Spiderman, Batman, Nova, and the 1970’s Marvel westerns. That was then, this is now.

At the tender age of 40 plus, I finally learn that the creators of my favorite books were Jewish! Not that it made a difference to my enjoyment that Bob Kane, Stanley Lieber, Larry Lieber, Jack Kirby, Jerry Siegel, Joe Shuster, and so many others had a Judaic background, but now that I know that, some pieces have fallen into place.

Arie Kaplan has written “From Krakow to Krypton”, and explores the Jewish mythologies one more time. Danny Fingeroth, in “Disguised as Clark Kent”, also took on the monumental task of studying the origins of the characters and their circumstances with relation to Jewish teaching. Both books are marvelous, and come across a little differently. “Krakow to Krypton” breaks the development of the comic book age into Golden, Silver, and Bronze with discussions centering on different topics and the logical progression from Eisner to Lee to Spiegleman.

While comic books were not overtly Jewish, the concept of ‘strange visitor from another planet’ and the ‘last survivor’ reflect the Jewish transition during passages to America to escape oppression. Images like Clark Kents’ bespectacled, book worm, mild mannered was stereotypical of being Jewish. Even the name, Kal-el, while it sounded neat to readers of the time period contained Hebrew. Roughly translated, it means “All that God is”. Jewish readers would have picked up on that, while others would miss that entirely. The myth of Golem could even be read into Superman (as Eisner did).

What is remarkable about this book is the depth of the discussion and the obscure examples of Judaic references in specific issues. For instance the prayer by the Thing from Fantastic Four (2002) is outstanding. Joe Kuberts’ Ragman, Yossel: April 19, 1943, and Caper by Winnick make Kaplans’ point beautifully. Throughout the life of Will Eisner, his work evokes a certain aura of Jewishness, and if we consider “Contract With God”, “Zion”, and the Spirit, the influence is powerful. If we add into the mix, the X Men by Stan Lee, Jack Kirby, and Chris Claremont, the aliens within us theme is even stronger.

I was mesmerized by the easy to read, easy to digest, and most importantly, the passion that Kaplan displays for his subject. Well chosen art accompanies the book, yet I hope the final pictures are taken from flat books (not bound in hardcover).

Viewed as a series of two books, Krakow and Disguised should be primary sources for truly academic discussions why comics aren’t just for kids anymore. I highly recommend “From Krakow to Krypton”, just after morning prayers.