eQuoo: The Next Generation: Lodestar 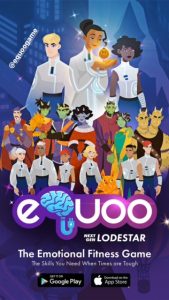 Each era is also its own separate story. Story 1, which is called “The House of Krondolar,” is a parody of fantasy epics like Game of Thrones and Lord of the Rings. You can see all of the “House of Krondolar” characters in this poster for the game, which was illustrated by eQuoo‘s multi-talented lead artist Celia Rodriguez.

As mentioned in the trailer, your mentor and guide in the game is a mysterious woman named Joy, who’s a member of the Lodestars. But who is Joy, really? What’s her origin story? And what’s the origin story behind the Dial? When was it first created? Who invented it?