I wrote the screenplay for an educational children’s online game called DISASTER HERO. The educational goal of that game was to teach children how to prepare for natural disasters. This game is free to play online at www.disasterhero.com, and it was produced in 2012 by Legacy Games, in cooperation with the U.S. government. Here’s the official description of the game from the DISASTER HERO site:

“Do you have the skills needed to prepare, survive and recover from a natural disaster? Join Dante Shields, the internationally famous disaster specialist, and his genius prodigy, Mika, in the high-tech holographic simulation gameshow, Disaster Hero. Compete against the members of Dante’s elite disaster specialist team in four different disaster scenarios; earthquakes, tornadoes, hurricanes, and floods. If you can prove victorious then you could become the next Disaster Hero!”

While we were developing the game, producer Jon Cooperson, conceptual artist James Ramos, and I all worked very hard to come up with a team of “disaster specialist” superheroes (led by the “Dante Shields” character mentioned above). We wanted to give the superhero characters a very “Cartoon Network/Justice League Unlimited” vibe, and I think we succeeded. But don’t take my word for it. Here’s what those superheroes looked like: 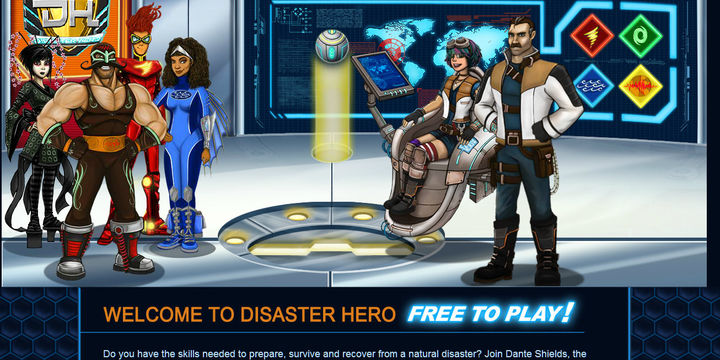