Getting To Know Franz Kafka

Recently, I wrote a humor piece for the comedy site Points in Case. It’s called “Franz Kafka’s Bar Mitzvah Speech.” You can check it out HERE.

I was inspired to write this piece when I was doing some research for a nonfiction project and I accidentally came across images of the Old-New Synagogue in Prague. My research told me that this was where Franz Kafka had his Bar Mitzvah. All of a sudden, images of Franz Kafka as an awkward, obnoxious 13-year-old Bar Mitzvah boy filled my head. 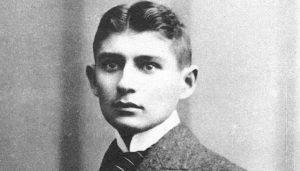 When I first started working on this humor piece, it didn’t seem like it was really coming together. Kafka’s novels and essays and short stories are SO relentlessly dark and depressing and bleak. How would I make his Bar Mitzvah speech funny while still making it feel like something the REAL Kafka would write?

Then I realized I should make the adolescent Kafka sound like a combination of Gru from Despicable Me and Nandor from What We Do in The Shadows. What both of those characters have in common is that they’re very whiny and petty. If I could make teenage Franz Kafka that whiny and petty, while still making him somewhat dark (but, you know, not “adult-level-Kafka” dark), this humor piece could work.

Also, I needed to tap into teen Kafka’s anger, his rage against his parents and other authority figures. If he wasn’t angry, he’d just be sad, and this humor piece would ALSO just be sad. But the more teen Kafka railed against his parents and his rabbi and the frustrations in his life, the funnier he became. He was like an angry chihuahua: tiny and physically frail and not to be messed with.

There was just one last component I needed to really make this adolescent Franz Kafka come to life: I had to think about some of the things that were on my mind when I was preparing for my own Bar Mitzvah. So yeah, I put some of my own teenage grievances into the mix while writing this piece.

Hope you enjoy it! (Which is a needy thing to say, and one that Franz Kafka totally wouldn’t be on board with. Oh well…)